FAT 2011 was a huge success! The Make Den team (Karen Kiener, Jenn Nguyen, Sissi Ke, Emma Zener, Eva Bowering and Margaret De Gruchy) were a force to be reckoned with before the show - Karen was altering garments by hand up until 10 minutes before the show, while Jenn and Sissi supervised hair and make-up with eagle eyes. Our hard work paid off and the girls looked fantastic wearing the three L's on the runway - Leather, Lace and Leopard! It's exciting to officially have a Make Den clothing line - as well as a new magazine 'Atelier', edited by Jenn N, our resident graphic design genius!

All of the pieces seen here are available for sale at Tomorrow Never Knows, at 1207 Bloor St. W as of Tuesday morning!
The best part? You can make all of these pieces yourself at The Make Den Sewing Club. Email themakeden@hotmail.com to register for classes!

Photos courtesy of Wes Harkness and Steve Alkok
Posted by Irene at 4/27/2011 No comments:

So, it's not very often that I get excited (like stupidly excited) about waterproof grease or chain lubricant - but Orontas, a Toronto-based bike care company, changed that pretty quick for me. All of their products are biodegrable, made from plants, petroleum free, and made in Canada. What's not to love?! While inspecting the chain cleaner (with what I can only describe as glee), my buddy Mark commented "Sooo basically, you could use this as mouthwash." (Except... don't).
Then, today hit 2o degrees. It was a day of bbq's and bike rides (and advanced poll voting - go vote!) - and of course some backyard bike love (as you can see below my Huffy's chain needed some serious affection). I hauled out the tool box, threw on some flip flops and set about changing tires, truing wheels, and making my bikes sparkle extra shiny in all this newfound sunshine. And I have to say, the Orontas stuff worked great. Sometimes, awesome things come in unsuspecting packages (Or rather sleek minimal packages, that resemble hair products more than bike repair ones - I do love me some good design!).
But ultimately, anyone who's manifesto states that they're not a brand, but a wreckless commitment to do better.... just wins.

My friend Adrian Sinclair is a babe on a bike. He does many rad events and projects, and this one is just blowing me away.

So I am going to sign up to volunteer to help people exercise their right to vote!.

You can learn more about this project and many more at Transformation Project's website.

And if you haven't been a young Canadian on the internet in the past week, here is the massive viral video of my friend Ajay from BEE Vancity not being Mr. Dressup.

And they are having a dance party. Maybe they'll host a Dance-Off?

I'm not a DJ but I was offended. But you know me, I'm just a part of that left wing fringe group known as being a woman....

NOW GO AND VOTE. A lot of people just recently died for the right to do so. Not jut in Federal elections, provincial and municipal. Care about the streets you live in and the air you breathe. Participate in creating the world you live in, or live by Plato's famous quote:

"Those who do not participate in politics are doomed to be governed by their inferiors."

My really awesome longtime (since we were awkward & fourteen) friend Erica is spearheading a really great urban farming business in Toronto called City Seed Farms. Their main initative is to provide a local food source to the community, by the community. This is done through farming backyards in the High Park/Junction neighbourhood, and there-by better utilizing our unused city space.
And even better, everything is pedal powered! From tools to produce, it's all transported by bicycle, and one rad bike trailer (made custom on the Toronto Islands). Seriously, how awesome is that thing.
Check out their video for Project Wildfire, or their Toronto Star article last week.
All in all, I plan on taking that trailer out for a spin asap.
Posted by laura! at 4/19/2011 No comments:

Sometimes we do things, other than ride bikes or make stuff. Sometimes we play in bands like patty.... or host shows in our livingrooms, like me.

Sometimes those things happen at the same time.

Email ThisBlogThis!Share to TwitterShare to FacebookShare to Pinterest
Labels: bands, house shows, this is a parade

I don't know where I first met Dave Meslin. I think it may have been around the time he helped start up the Toronto Bike Union, Spacing Magazine or Dandyhorse Magazine. All I know is that I am really happy when I see him and tend to learn a lot from our hang-outs, although since I've moved to Vancouver it's more FB wall chats. Dave is a smart individual whose main goal in life is to be genuine and proactive in his environment. He is a bundle of energy and Toronto is lucky to have him.

Today his TEDxToronto video was featured on Ted's homepage and social media feed. Congrats Dave! You rock, and while our City Hall has been slow at picking this up, now the world knows it. xoxo

Read more from Dave's Brain at his blog: The Mez Dispenser.

And if you didn't know, I am a huge TED fan. Got hooked on it in 2006, around the time I started working on the Toronto Wildlife Show at Ryerson University, which is the show that introduced me to kNodresscode, which comprised of my now beloved Nightshade sisters. During the Olympics I got to write a blog for TEDxWhistler about sustainable tourism for 20-somethings. Last fall I got to go to TEDxVancouver and see some great speakers and hang with the boys from Humans who played the after show. (They are featured in the Bike Fabric Video and their song "WAKE UP" is the trailer song.) Her is a gratuitous shot of me DNSing and my Chrome bag. I may have been the only person to bike all the way out there, which was a bit disappointing but only proves how hardcore awesome us Nightshades are. xoxoxo

As many of you know, the trophy sadly went missing on the night of the Dance-Off. Although we searched everywhere for it, we never found the culprit, and Branko was denied his glorious Dance-Off reward. The only clue we found was a golden bike cog that had fallen off the trophy as the thief ran out the door. Until now. These were send to my email this morning from someone named "xylonette_666@hotmail.com", along with the following note:

"Hey Branko, you had some pretty sweet moves on Thursday night. Too bad you didn't keep an eye on your trophy or you would still have it today. Muahahahaha! I challenge you to a rematch."

If anyone knows anything about xylonette_666 or recognizes where that photo was taken, please get in touch!!!
Posted by Irene at 4/07/2011 6 comments:

Laser cutting is the best thing since Crayola! You can make ANYTHING! 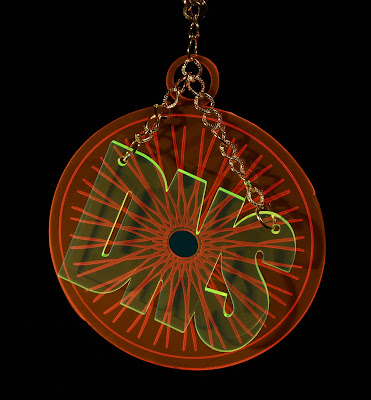 It's time. The top secret project will be secret no longer.
Over the past 3 months, the Deadly Nightshades have come together on a project that combines our love of fashion, art and cycling. Documenting our process step by step, we've created our ultimate bike out of unconventional materials - to scale, 3D and down to the tiniest detail. So, after hours of sewing, constructing, screen printing, problem solving, filming & editing - we reveal our top secret project, a sneak peek the bike that has (literally) taken over our lives, and present the trailer for our short film FABRIC BIKE.
And in true DNS fashion, at the 11th hour, we're submitting it to the Bicycle Film Festival's shorts category. So wish us luck!
Posted by laura! at 4/04/2011 2 comments:

Bike Legs was bananas. The dance off was a fierce competition, complete with lifts, splits & other undefinable moves. But in the end, Cannibal Vixen's terrifying yet beautiful homemade trophy, was awarded to Branko (known for wearing very little clothing on behalf of DNS or better yet his band Dinosaur Bones). The rest of the night was all smiles & horse heads until SOMEONE STOLE THE TROPHY. Literally. Some girl ran in, grabbed it, and ran out.
Seriously, we're just as confused as you. Good thing all that awesome swag from Knog kept everyone grinning, and biking home safe & seen!
Thanks for an awesome night!

Thanks to everyone who made it out to our awesome Pop-Up Shop "Tigerlilies & Nightshades" at the Drake Hotel yesterday! We had an amazing time with tons of local designers & fashion lovers alike - from le Petit Beret to Worn Fashion Journal, to amazing complementary styling from the Aveda Institute's Blow Bar. There was one moment where I had a beer in one hand, someone massaging the other, and two people styling my hair. I felt like a QUEEN. Aveda is officially welcome at any DNS event, or just to hang out at my house every day of my life. Forever.

Photos by Connie Tsang. See the whole set HERE!
Then we flipped the space for a ridiculous all out dance party! After having the Torontoist describe us as the city's "most dangerous, sultry, and fashionably dressed bicycle gang" we hope we lived up to it with our matching (as always) outfits! So stay tuned - dance off photos on the way! AND THE MYSTERY OF THE STOLEN TROPHY...... !!!
Posted by laura! at 4/01/2011 No comments: