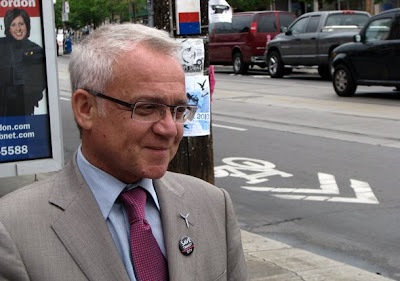 Voting. It can leave a bad taste in my mouth when I have to choose between two candidates when I like neither of them. Like Will Rogers said, "Liberals are the only reason to vote Conservative". (okay he was talking about the Democrats, but you get the point, right?!)

That's how I feel about Toronto's upcoming Mayoral election. Like I need to chose the least evil of the 6 candidates...
Rob Ford was actually my first choice until I heard his stance on bike lanes here, which ruined his chances with me forever. I know, I know - you've got some reason why I should never have liked him. He yelled at your neighbour and kicked a fence over or something. I know already. I still like him. So there. He's a cheap bastard but at least you know he's a cheap bastard.

Mondo creeper Giorgio Mammolitl dropped out this month, leaving the vaguely bike friendly Joe Pantalone and Sarah Thomson as my only real choices, unless John Tory (twist!) decides to run...

So clearly I need to do a little more research about my last two choices before I make a decision. Stay tuned?
Posted by Irene at 7/30/2010 1 comment: 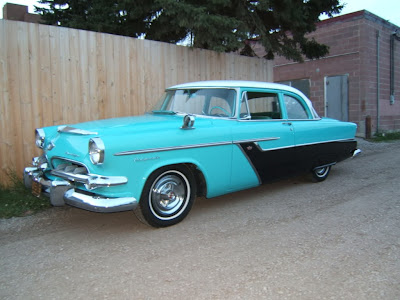 celeste aka seafoam, get it together bianchi 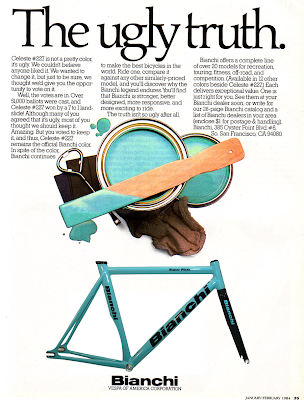 So, I've been holding out on you guys, sitting on this vintage ad gem for awhiles now. My apologies.

"Ugly"??!! What the fuck is that? There is no colour that is so beautiful, fun-loving, soothing, regal, and sublime as our beloved seafoam. Reading this I felt a little betrayed. As though my faithful bicycle had a secret life I never knew about. You don't WANT to be seafoam? You didn't choose this colour for yourself? You are unhappy being seafoam? Oh little bike, it's going to be okay, I will show you how magnificent you really are, by posting photos of seafoam things in the world.

I need your help nightshades! Please send me seafoam, whatever you got. PLEASE!!!
Posted by naamers at 7/26/2010 2 comments:

We may not skate or surf primarily, but from one DIYer to another... this is lovely.

SPOT THE NIGHTSHADES (and Puppyshade)

This is a little late, but I few months our dearest and most talented friend Kelly Henderson styled the New Pornographers video "Crash Years (Matador)".
Our other dear friend Sammy Rawal directed this master piece and we shared some shots with our Tribute bike gang The Dragon Scorpions(who also built some AMAZING bikes for the shoot and general riding)
See if you can find the Nightshades and the Puppyshade (in a nice shade of Seafoam himself)

So someone (I think it was Emily Landau) at the Torontoist recently described the Deadly Nightshades as a combination of The Pink Ladies from Grease, The Hells Angels and The Planeteers...
And since this was undoubtedly the most accurate description that anyone has ever graced us with, I thought I'd make a collage in honour of Emily's excellent descriptive abilities.
1. The Deadly Nightshades, taking over the runway at L'Oreal Fashion Week.
2. Razors meet Rizzos (aka Hells Angels + The Pink Ladies)
3. The Original Johnny T. dance sequence, and the modern day version...
4. Johnny T.'s dance partner in crime, Mia Wallace.
5. The inspiration for Uma's look in Pulp Fiction, Anna Karina, French New Wave film star.
Posted by Irene at 7/19/2010 1 comment:

Poleriders Were Inspired by the Deadly Nightshades?!

It's true. Even we had a hard time believing it, but we went over our tapes from New York with a fine tooth comb and found a quick - not to mention totally unnoticed at the time I taped it - off-camera sound bite from Andrew Katzander (this guy) claiming that the Deadly Nightshades were an inspiration for him when he started Poleriders...

For those of you who have never heard of the Poleriders, they're a team of poledancing babes who dance in costume (not naked), on a bicycle propelled platform with pole attached. Hilarious.

The video is posted here - notice the slightly sinister laugh at 0:22!!! 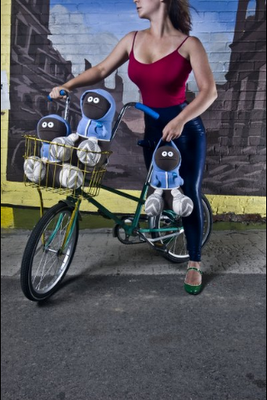 HELP HELP HELP! Someone stole my FAMOUS low rider out of my back yard yesterday evening.
If you see it PLEASE PLEASE grab it.
100$ reward for it even though that cost's more then the bike. I love this bike more then anything.
Sincerely,
A VERY SAD SNOW WHITE
Posted by K.White at 7/07/2010 2 comments:

your friendly eco-awesome bag producers on roncesvalles is having a design event that you should attend!

Mariclaro is inviting cyclists to the store to collaborate on the best courier bag. register~! there will be beer, B B Q, friends, music... all the good stuff. AND! participants get a gift certificate for any bag in the store. like whoa.

CCHEECK OUT THE DEETZ HERE ! 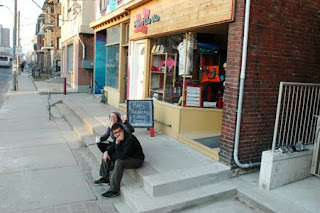 Mariclaro is at 457 Roncesvalles Ave. open every day, creating things and probably drinking beer. come say hi, we love you.

Gallery Spin with The Nightshades!

Our first Gallery Spin with Mia from The Drake was a HUGE success! Tonnes of rad people turned out with their bikes, the weather was perfect and Mia showed us some of the best work in Toronto right now (see the post below for pics).
That's me, Sister Irene and the SPANDEX crew, rockin' a boombox and my special Canada Day habit for the 1st of July. (Just in case your G20/World Cup/Canada Day weekend didn't have enough going on already...)

Is it me, or does SPANDEX make everything a little better?

I think I just answered my own question.

For the record, my spandex tights and Pattie's one-piece were home-made. Kirstens one-piece is vintage and Cat made her own Zebra outfit.
All pics by John Lee.
Many thanks to Mia at the Drake for hosting and organizing the event.
Posted by Irene at 7/02/2010 2 comments:

"The Rape of Africa" at The MOCCA

This is the David LaChapelle mural at the MOCCA right now, plus Nightshades. It's called "The Rape of Africa", and features a 30ft high Naomi Campbell (not seen here) posing with right breast exposed, surrounded by giant gold cross, chains, diamond skull a la Damien Hirst and golden semi-automatic. The little cherub on the right is wearing a crown with Spanish insignia, and the one in the centre (who's head is cropped here) is wearing a football helmet. It's an intense piece given the size, subject matter and awesome execution.

The guy from the MOCCA remarked that it was pretty good 'considering he was a fashion photographer'. I think it was the best thing there, period. 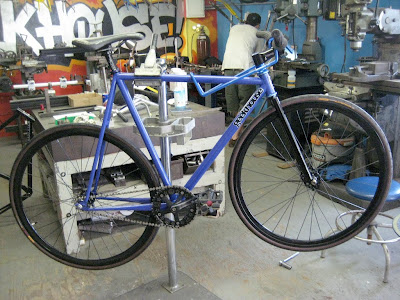 While we made many friends at the BFF in new york, sometimes being a gang rouses suspicion. The boys over at Geekhouse Bikes, (an amazing custom frame shop hailing from Boston MA), made THIS bold (coughhilariouscough) claim, regarding us and their missing bicycle. Or as the craigslist posting of their stolen property states "the american apparel version of those urban outfitters bikes." (baha) Ouch.
While we've got Igor back on the lose to steal your and everyone else's bicycles.... we the Deadly Nightshades would do no such thing. But, we could totally take on the Geekhouse mustachio'd ways, in some form of west-side-story-street-rumble-on-two-wheels.
Anyhow, speaking of hilarious craigslist bike posts..... (thanks for that gem kirsten).
Posted by laura! at 7/01/2010 No comments: 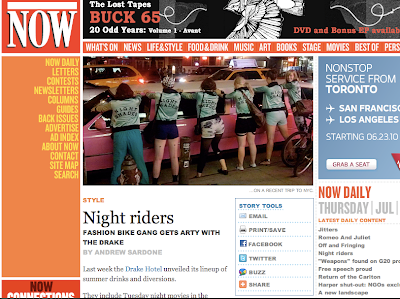 Always good to feel some Nightshade love from everyone's favourite NOW Magazine! Thanks Andrew!
Check out the article in this weeks issue right HERE!
Posted by laura! at 7/01/2010 1 comment: