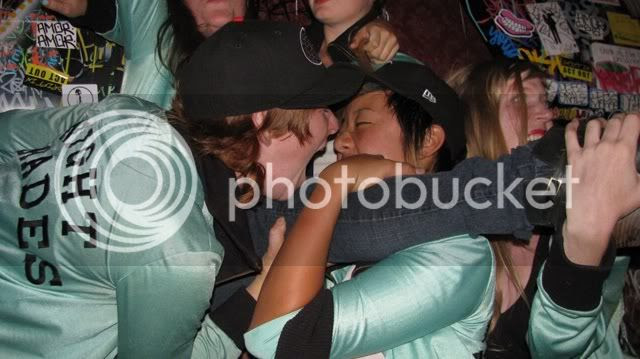 So one week ago I joined into the Nightshades bonanza going down in Brooklyn at the moment, where 5 of the 7 of us have been living large in Bushwick (or rather in an overcrowded apartment = neverending sleepover). Sadly we had to say goodbye to Namtron tonight, but next week we add Snow White to the ranks. Highlights so far include:
a) dancing in the Chrome store.
b) running into Die Antwoord while gallery hopping in Chelsea (and Yolandi was wearing children's pajamas).
b) sneaking into a private VICE party where we danced our faces off to a DJ set by Erykah Badu (where we ran into Die Antwoord again. Weird.)
c) playing a ridiculous game called Stump, involving throwing a hammer and summersaults and talking in a variety of accents.
d) roof picnics at sunset.
e) and some EPIC BIKE RIDES, obviously.
It's been an amazing start to my time in NYC, but in reality, I'm just counting down the days til Bike Kill. EEK.
Posted by laura! at 10/18/2011